AGNOSIA
Assessment of agnosias often combine both neuropsychological testing and brain imaging. A basic neurological examination is designed to determine: intellectual status, memory function, linguistic competence, and to assess sensory-perceptual processing in the affected modality (Bauer, 2006). Brain imaging (e.g. MRI, CT) tends to be utilized for identifying more subtle forms of agnosias and determining the cause of cerebral lesions.

A. Rule Out Alternative Explanations
A variety of cognitive and neurological conditions can cause disturbances in recognition abilities. For this reason, it is critical to assess for these conditions in order to rule them out as explanations for an individual's recognition disturbances. The following table presents some strategies for achieving this purpose. An assessment of an individual's language ability is also important to conduct in order to understand the role that linguistic factors may have on the recognition defects. Language ability includes: naming, comprehension, fluency, repetition, writing, and reading (Bauer, 2006). 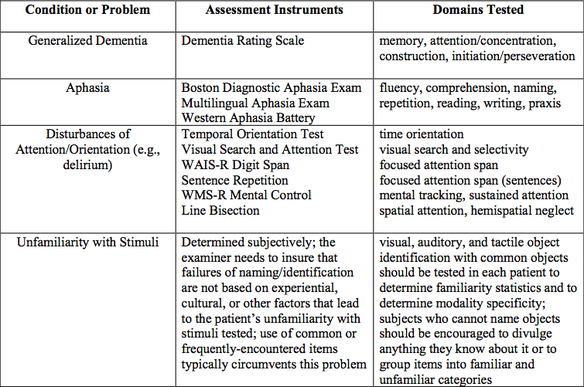 Assessments used to help rule out alternative explanations for disturbances in recognition (Bauer, 2006)
[Click to ENLARGE]
B. Determine the Scope and Nature of the Recognition Disturbance
Further testing may be completed to determine the precise nature of an individual's recognition deficits. For instance, distinction between apperceptive and associative agnosias can be done. This can be accomplished by allowing the individual with agnosia to complete copying and matching tasks.